s long been speculation by the eyecare community about Van Gogh’s eyesight and why he used so much yellow in his paintings. Some have suggested that he may have been over-treated with a medication called digitalis. In toxic yet non-lethal doses, digitalis is known to cause Xanthopsia, commonly referred to as ‘yellow vision.’ The extensive list of disorders treated with the medication during that period include headaches, mental illness, nausea, melancholy and inflammation of the eyes, just to name a few. We know from Van Gogh’s own letters that he suffered from mental illness and that he often complained about his eyes, so digitalis causing the yellow vision is entirely possible.

Another theory about his yellow vision is that it could have been caused by absinthe, a known side effect from excessive drinking of the potent liquor. Absinthe was very popular in France at that time, with bars actually hosting ‘the hour of absinthe’.

Another visual effect in Van Gogh’s paintings is the halo swirling effect as seen in his painting, The Starry Night. It has been suggested that he may have suffered from lead poisoning, caused by the use of lead-based paints used at that time. One visual symptom of lead poisoning is the swelling of the retina, causing a halo effect around lights. Others have suggested that Van Gogh suffered from narrow angle glaucoma attacks which can also cause colored halos. Of course, cataracts cause halos around lights at night but since Van Gogh committed suicide at the early age of 37, it is unlikely that he had cataracts.

Van Gogh was also quite famous for his multitude of Self Portraits. He painted over 30 ‘selfies’, but his choice of his eye color varied from portrait to portrait. Some have hinted that he might have had 2 different colored eyes. Or perhaps he was just colorblind and didn’t really know the true color his eyes.

Whatever is the case…he certainly had an eye for beautiful paintings. 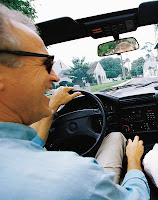 Glare is a serious danger when it comes to driving, both during the day and night, but especially when driving directly into the sun. It can temporarily BLIND the driver so that curves, other cars or even people are not seen, possibly resulting in tragedies that could be avoided. Most accidents from glare happen in the early morning or late afternoon when the sun is at eye level, thereby impairing vision.

There are two ways to find relief from glare. The first is by wearing POLARIZED SUNGLASSES during the day. Polarized lenses not only offer 100% UV protection for the health of the eye, but they also dramatically reduce glare caused by reflected light. First time wearers are amazed at how much better they see as well as how rested their eyes feel at the end of the day.

So improve your driving and your safety by wearing Polarized Sunglasses. Your life and the life of others may depend on it!