Do you have dry age-related macular degeneration (AMD)? 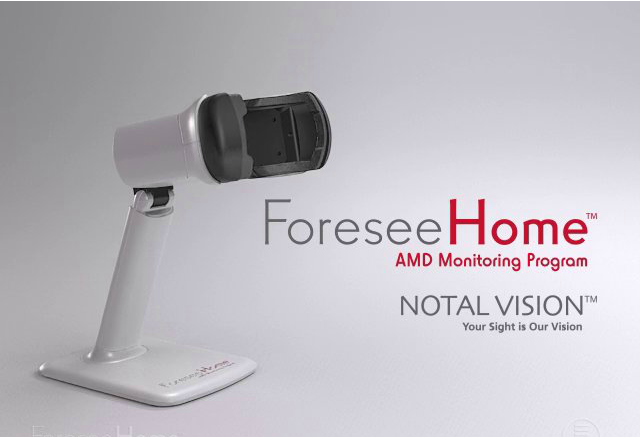 Studies show that up to 43% of dry macular degeneration patients progress to wet AMD. The progression can be so subtle that you may not even notice it at first. Since our brain can compensate for poor vision in one eye by filling in missing areas, often new visual distortions from wet macular degeneration are missed.

Wet AMD occurs when blood vessels in the eye start to bleed. This causes damage to the macula in the retina. Luckily there are effective treatments for wet AMD, but the success of these treatments depends on early detection and treatment.

The Eye Associates has always recommended that macular degeneration patients do a daily vision check at home with a amsler grid. It a simple way to detect vision changes that occur when dry macular degeneration becomes wet. Now there is a high-tech version of the amsler grid that can detect changes earlier so treatment can be started earlier. The ForeseeHome is the first FDA-cleared home monitoring device that is clinically proven to detect even the smallest changes in your vision.

This simple 3 minute test  that you do in the comfort of your own home detects early changes in your vision. You test one eye at a time by looking into the Foresee Home device. When used daily, ForeseeHome detects changes before you notice them yourself. This allows you and your doctor to monitor your vision for any changes between eye exams. Monthly reports are sent directly to your doctor and any changes will be an indication that you need to be seen immediately.

Click here  to view a video about Foresee Home.

How to get the Forsee Home

If you are interested in getting a Foresee Home, contact The Eye Associates. Your doctor will write an order for the device. Notal Vision, the maker of the Forsee Home, will contact you for your insurance information. Insurance will usually cover the cost. The device will then be shipped to your home with instructions on how to set it up, as well as a help line phone number. You do not need a computer to use it. It can be used with wi-fi, cellular service and a landline.